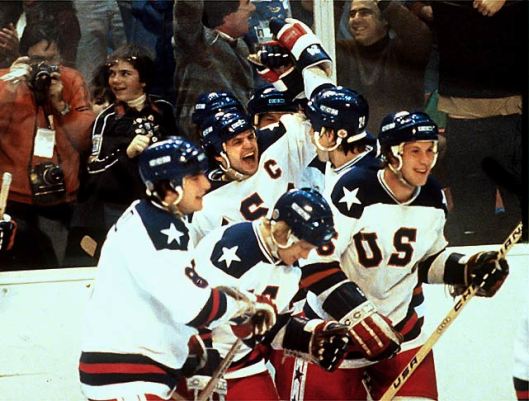 My first vivid sports memory came while riding in the back of my friend’s Oldsmobile station wagon on the way to the Skate Inn on a Saturday morning.

“Did you see that game last night?” my friend asked.

“The hockey game, dummy,” he said. “We beat the Russians.”

“It was incredible,” his mom chimed in from the front seat. “It was the most amazing game I’ve ever seen.”

“Really?” I said, feeling misinformed. Hockey wasn’t something people talked much about in LaGrange, Georgia. “The Russians, huh?”

I had a vague notion that the Olympics were going on because my dad had taken over our television set, demanding the channel be switched to ABC all week long during primetime hours. One night, we watched some guy in a skin-tight yellow suit named Eric Heiden skate around in circles, and it was pretty boring. I remember being very disappointed about having to miss The Dukes of Hazzard on Friday night, and I probably ended up retreating to my Star Wars figures and army soldiers in the playroom. Somehow, I missed the news that we beat the Russians.

Circling the rink of the Skate Inn while the speakers played Blondie and Michael Jackson, I thought about the Russians and what beating them meant. I was in 3rd grade, so my only understanding of Russia was this big, wide expanse of pink across Europe and Asia that was called the “Union of the Soviet Socialist Republics.” The Russians, my teacher told us, were not our friends. Their people were very poor, and had to wait in long lines for basic things like toilet paper. Yet their military was very powerful. They had just taken over some place called Afghanistan, and the President had gone on television and was very upset about it. The President went on TV a lot in those days, usually to talk about how we needed to save more energy. It was horrible because he was on all the channels, and you just had to wait him out—like waiting for a storm to pass before you could go outside to play—until he was done speaking and Happy Days could come back on.

It would take a while for me to realize the gravity of beating the Russians at that particular time in history with an amateur U.S. hockey team that was not expected to win anything. They would make the cover of the Sports Illustrated magazine that my dad read every week, then there was an awards-show television special about the team that my babysitter gushed over, and then there was the inevitable made-for-TV movie. It was such a momentous culmination of sports, politics and a fairy tale ending that I could almost convince myself, years later, that I had actually seen the game (or the replay of the game, since the original broadcast was tape-delayed for a primetime audience).

I didn’t see it, though. If it had taken place two years later, when I was into sports big-time, I would have been all over it. In 2010, the U.S. hockey team took Team Canada to overtime before losing the Gold Medal. That was an exciting game. Even if the Americans had won, however, it couldn’t have compared with The Miracle On Ice, the one I missed.

“Did you watch the game last night?” another friend asked me over Cokes at the Skate Inn. “My dad jumped so high, he almost put a hole in the ceiling!”