Mark Sanford won back his old congressional seat on Tuesday. Remember him? He was the South Carolina governor who, in 2009, went AWOL for several days after telling his aides he was going for a hike on the Appalachian Trail. Turns out, he was actually in Argentina with his mistress. Unfortunately for Sanford, a reporter with Columbia’s The State newspaper was waiting for him in Atlanta as he stepped off his return flight from Buenos Aires. 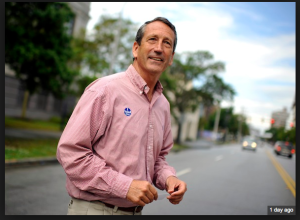 A lot of people wanted Sanford to resign after the Appalachian Trail story hit. After all, he had disappeared for nearly a week, lied to everyone about his whereabouts and cheated on his wife, all while on the payroll as chief executive of the state. Sanford, however, stubbornly hung on his job and managed to finish out his term. Politics, it seams, means never having to say you’re sorry.

A lot of people expected Sanford to retire into private life, cash in on his public service with a cushy corporate title, and perhaps write a mostly ignored memoir. Those people, however, know nothing about American politics in the 21st Century. After leaving the governor’s mansion, Sanford immediately began planning his political comeback, which culminated Tuesday with a win in South Carolina’s First District over Stephen Colbert’s sister.

Sanford may never go on to become president (he was considered a strong contender for the 2012 Republican ticket before The Hike That Never Happened), but his return to Congress is another reminder that there is no shame in American politics. Also, there isn’t much talent. How could both parties fail to come up with more viable candidates for a national seat that a disgraced former governor and a comedian’s sister?

The values of our elected officials, while probably never sterling, seem to have nosedived in the past several years. Looking back, Bill Clinton set a bad precedent by not resigning after the Monica Lewinsky scandal erupted and held the government hostage for more than a year. Instead of stepping down, he lied about the affair to Independent Counsel Ken Starr and to the media, then refused to leave even after he was impeached. Was the Lewinksy affair exploited by Republicans determined to destroy the Clintons at any cost? In my opinion, yes. But ol’ Bill didn’t do himself any favors by trying to cover things up. So he should have resigned. The Presidency should have been held a higher standard.

That, of course, was 15 years ago. In today’s world, accepting responsibility for your actions and mistakes is seen as a weakness among powerful people in the public and private sectors. Expressing regret or shame for something you did is considered political suicide. And, more often than not, the public does not hold these scoundrels accountable. That’s how we end up re-electing people like Mark Sanford who lack the common decency to just go away.