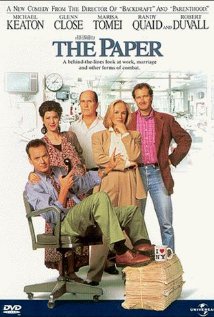 I saw the above movie by myself in a multiplex theater in Columbia, Missouri in 1994. I was less than a year removed from journalism school and working as a general assignment reporter for The Mexico (Mo.) Ledger. I remember The Paper as a good, not great, Ron Howard movie that aptly portrayed a big-city newsroom during the pre-Internet 1990s. There were a few inspiring scenes about scrappy newspapermen and women making a difference, including one moment in which Michael Keaton, who plays the managing editor, actually has to stop the presses to keep an errant story from running. “Should I say it?” he asks a colleague on the press room floor, slyly acknowledging that shouting “Stop the presses!” is one of the most hackneyed lines in movie history.

Of course, Michael Keaton does say it, and I left the theater reassured that the trade I had chosen had some value and honor, and that I could, in fact, make a difference myself. I also left with the nagging desire to get the hell out of Mexico, Missouri.

In the fall of 1994, I got my chance. I interviewed with The Kansas City Star for a position as a community reporter. The job entailed covering suburban city council meetings and writing features about things like 120-year-old oak trees and high school valedictorians. Still, it was a chance to work for a big newspaper in a city of 2 million people. “Well, you want the job?” the gregarious bureau chief asked me on the second day of my interview. I couldn’t say “yes” fast enough. I practically flew down the Interstate back to Mexico (Mo.) to collect my things and cram them into a one-bedroom apartment in suburban Kansas City.

Like most metro dailies at that time, The Star was the only game in town when it came to news coverage. It had merged a few years earlier with the morning Kansas City Times, and the combined papers were owned by media powerhouse ABC Capital Cities. The Star was in the process of launching “community newspaper” inserts for different parts of the metro area to essentially run the suburban papers out of business.

Even though there had been rumblings for years about the decline of the big daily newspaper, The Star was a well-financed, profitable, regional force. It steered the flow of information in the city. Stories that appeared on local news stations were usually lifted from the pages of that morning’s Star. Occasionally, I would cover a city council meeting where a big zoning issue was being debated, and a TV reporter would slide up next to me and whisper, “Are you with The Star? So what’s going on here?”

Was the pace at The Star as frenetic, unbalanced and exciting as Michael Keaton’s newsroom in The Paper? Not really. But there was still a sense that what I did for the newspaper was important, even when it was just writing up school notes from the Shawnee-Mission District. Once in a very long while, I might see my byline on page A1. Then for a whole day I got to hear radio DJs and news anchors talk about my story. It was pretty exhilarating stuff.

I worked almost two years as a community reporter for The Star,  then left for a health care reporting job in Florida. Many of my Kansas City friends remained with the newspaper and were promoted to other beats. When I returned to Kansas City, I attended a few parties with my old friends. You could spot the Star people at these gatherings because they were always huddled together in a corner of the kitchen, talking about the latest office gossip. Sometimes, an older Star employee would chime in with some gripes about meager pay and incompetent managers. After a while, I stopped going to the parties because I didn’t have much to contribute about the inner politics and machinations at the big newspaper.

Today, all but a couple of my newspaper friends have left that business for new careers, mostly in communications and public relations. The Star, like almost every other major daily newspaper in the United States, is a thinned down version of itself.  The pages are shorter and there are fewer of them, all in the interest of saving money on ink and paper. There are periodic layoffs and constant speculation about when the newspaper will stop printing in favor of an all-digital product. The people who remain in the newsroom spend a good deal of their time posting story updates on Twitter because that is the new medium for instant, breaking news. The Star has to compete in social media because today’s consumers don’t want to wait until tomorrow morning to read the news.

A friend of mine mentioned The Paper in a Facebook thread the other day. I hadn’t thought about the movie in years, but I suddenly have the urge to see it again. In my mind The Paper seems quaint, almost antiquated, about a faraway time when big city newspapers were as burly, complex and industrious as the cities themselves, when a paper’s influence and power went far beyond ink on a page.

What a difference 20 years makes.