When I was a kid, there was a show on NBC called “Here’s Boomer,” about a likeable, shaggy dog who led this wandering, hobo life. It was an unremarkable series, a kind of knock-off on the more popular Benji films of the day. The show had become such an arcane piece of TV trivia, in fact, that I actually thought I might be the only person alive who even remembered or thought about “Here’s Boomer.”

Then I read this article a few days ago, about a Pittsburgh man who was so affected by the show, that he actually decided to become a shaggy dog himself and have his named legally changed to “Boomer.” My first impression upon reading this was, “Boy, the people of Pittsburgh have changed a lot from the tough, hardscrabble steelworkers of the industrial age.” My second thought was, “What a sad, lonely man.” My third thought was, “Well, why not become a dog, if that’s what he wants to do?” 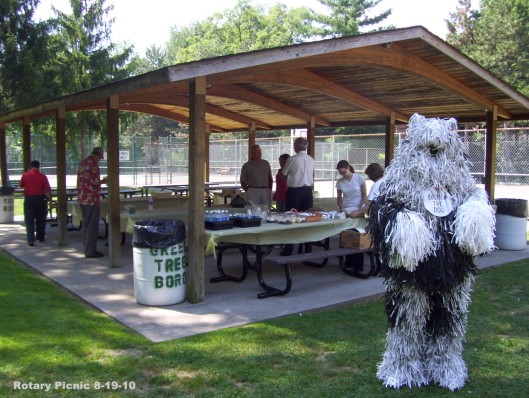 I guess you could say I’m a little conflicted about this story. Part of me thinks that, as long as you aren’t doing something that’s destructive, criminal or harmful to somebody else, you should be free to do it. By all accounts, Gary Matthews, or Boomer, just enjoys barking, eating from a bowl on the floor and occasionally sleeping in his dog house. What harm is there in that?

Another part of me, the “judgy” part, thinks perhaps Boomer should get some psychiatric help, and also worries if this story isn’t indicative of a larger trend. There is, after all, a sub-culture of people called Furries who like to wear animal suits and pretend that they are cute, cuddly creatures. Most Furries treat this as a hobby, but what if many of them, like Gary Matthews, decided to pursue their passion full-time? A lot of kids, like Gary and myself, loved “Here’s Boomer,” and the 1976 Disney movie, The Shaggy D.A. Could these media now be considered gateways to a mid-life crisis spent chasing garbage trucks, digging holes in the yard, and marking territory on various hydrants and mailboxes? 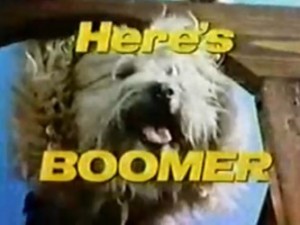 Finally, how does local government respond to activities by men who decide they want to become dogs? Does a leash law go into effect? We can’t just have these Boomers running loose on the city streets, can we?

I think we better have some extra Pooper Scoopers on hand, just in case.

One Monday morning a few years ago, I was settling into my office cubicle when my co-worker Dave popped his head over the wall and shared some sad news.

“You hear that Billy Mays died over the weekend?”

“Yep. They think it was a heart attack.”

“Wow,” I said, wondering if my father had heard about this. “That’s big news.”

“The Say-Hey Kid,” I said. “That’s what they called him in his playing days.”

“Who the hell is Billy Mays?” I asked.

“You know, the guy on the Home Shopping Network. The OxiClean guy.”

I had no idea who Dave was talking about. I soon would, however, as the cable news networks and celebrity gossip shows reported on the death nonstop for the next several days. I learned that Billy Mays was a fast-talking, charismatic TV pitchman who worked his way up from selling cleaning products and even had his own reality show for a while. I still didn’t know why his death was especially important, other than inspiring this mildly tasteless joke:

First Guy: “Did you hear that Billy Mays died?”

A couple of recent news stories reminded me of Billy Mays and my cold indifference to his death. Last week, South African Olympian Oscar Pistorius was charged with murdering his girlfriend. And on Sunday, former country star Mindy McCready was found dead in an apparent suicide. My first reaction to both events was, “Gosh, that’s terrible.” My second reaction was, “Who are these people again?” I had never heard of either one of them.

Of course, thanks to electronic media, I know now that Nike has decided to drop Pistorius from its advertising campaign and that McCready once starred on “Celebrity Rehab.” I know that Pistorius’ girlfriend was a supermodel who spoke out against domestic abuse, and that McCready and her boyfriend both died this year, leaving behind a son who hasn’t even reached his first birthday. I should point out I learned all of this without actively watching or reading any of the news coverage. The awareness seeped into me as if it were part of the atmosphere–a sound byte about the disgraced Olympian from the TV in the next room; a headline about Dr. Drew’s reaction to the country star’s death at the top of Google News.

I don’t mean to make light of these two stories. Both are tragic beyond words. But I have a hard time understanding the intense coverage and hourly updates. Is this the kind of news people really care about and want to follow? Or are we trained to take an interest in these stories because the cable networks have been feeding us a steady diet of them for so long? How many viewers knew who Oscar Pistorius was a week ago?

The irony of the 24-hour news cycle is that there isn’t enough real news to fill the cycle. And who wants to be hit over the head all day with stories about budget shortfalls, unemployment, Afghanistan, gun violence and immigration reform? You know, the stuff that really matters and could make a difference in our lives? We want a diversion from all that, and what better way than to fill us up with murder mysteries, courtroom dramas and turbulent lives that allow us to say, “Well, at least I’m not that guy?” Doesn’t really matter if it’s O.J. Simpson or the jerk who slapped an 19-month-old child yesterday on a Delta Airlines flight.

Okay, so I admit to reading a CNN.com article about the guy slapping the toddler. We all have our weaknesses. And, like a late-night salesman hawking cleaning supplies, the news media will keep pitching until it has something our sleep-deprived craniums absolutely, positively cannot resist.