A few days ago, a friend remarked on Facebook that he recently attended his child’s pre-school Halloween party, and one of the three-year-old boys was dressed as Elsa from the Disney movie Frozen, even wearing high-heels. My friend declared it “the ballsiest thing I’ve seen in a long while,” and complimented the kid and his parents for their bravery.

I could not help but think how sad it is that a three-year-old’s selection of a Halloween costume would be judged as ballsy or anything else. But in today’s polarizing culture, where every action is viewed as some kind of a political statement, a little boy dressed as Elsa probably is pretty bold. I know I would be a little nervous, as a parent, about what the other kids would say. Hopefully, everyone at the party was nice, and Elsa got lots of candy.

When I was three years old, I decided to be a witch for Halloween. My parents agreed and I went door-to-door with a pointed hat, blond wig, black sheet and an old broom. I don’t remember any of our neighbors making a big deal about it. Some of them might have thought I was a little girl. If my parents were embarrassed or worried about it, they never let on. It was simpler back in the early 1970s. Adults didn’t seem to fret about what kids dressed up as for Halloween, or anything else they did, for that matter. Today, we seem to be much more wrapped up in our children’s lives, as this recent Halloween story colorfully illustrates. 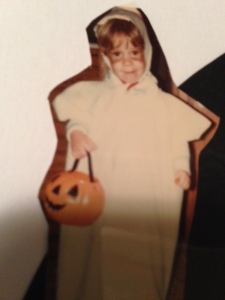 Anyway, I was lucky to have parents who let me be who I wanted to be for Halloween. I’m also fortunate to have had a mom who enjoyed creating my costume most years. I’ve included photos of some of the early ones. My “Jack O’ Lantern/Scarecrow” outfit actually won a contest back in the second grade!

My son is only four years old, but I’m pretty impressed so far with his originality when it comes to selecting Halloween costumes.

While many of his peers will dress up as Marvel superheroes or Disney princesses, my son wants to be a dinosaur. Specifically, he wants to be a Pteranodon. (If you aren’t up-to-date on your dinosaur names, a Pteranodon is a winged creature very similar to the more famous pterodactyl. In fact, I don’t know the difference between the two.) We ordered the costume off Amazon, and it seems to fit him pretty well. He can’t wait to spook his neighbors, and also educate them a little bit about paleontology.

Last year, my son went as a ghost, and that was a big success. We couldn’t find any toddler-sized ghost costumes, so my wife cut up a couple of pillowcases and layered his face with white and black makeup. He had great fun running through the neighborhood, a little white blur wearing silver and green tennis shoes. “I’m a ghost! I’m a ghost!” he shouted repeatedly.

I suspect that my son watches just as many movies and TV shows as any other kid his age. I’m a little surprised he doesn’t want to go trick-or-treating as a Power Ranger or a Minion or even one of the ponies from My Little Pony (still one of his favorite shows). I am sure the day is coming when he will fall into rank with what everyone else wants to be, but I hope not. Peer pressure is a powerful thing. It takes a lot of nerve, or even some balls, to be different in this day and age.

As is the case with a lot of things, I was the last person in my office of young, hip professionals to learn about the Bronies trend. Bronies, I am told, are a growing demographic of young men ages 18 to 35 who are fans of My Little Pony, a cartoon TV show created in the 1980s and originally aimed at little girls. Hasbro decided to revitalize the franchise with the release of the 2010 movie, My Little Pony: Friendship is Magic, and found an unintended audience of young men who liked the upbeat storyline, the anime-style animation and, well, ponies, I guess. The Bronies trend is now officially a thing, so much so that there is an acclaimed documentary about this community of men who celebrate, and sometimes dress up like, little ponies.

Upon learning about this from my hipster co-workers, then doing a quick Google search, my reaction was disbelief. Why on earth would adult men, some of them middle-aged adult men, obsess about a cartoon for little girls? I even thought about writing a smug, what-is-the-world-coming-to blog post about a fanboy trend run amok. Then, something curious happened. My three-year-old son started watching My Little Pony. It soon became his favorite show.

And you know what? It’s not too bad. It’s well-written, the animation is sharp and inventive, and there are many pop culture references (scenes lifted straight from movies like Star Wars and Raiders of the Lost Ark, for example) that adults can appreciate. Unlike some kid shows, the overarching theme is positive and socially progressive – it’s the story of how six very different ponies join forces and learn that they can accomplish almost anything if they work together. I like it better than one of my son’s other favorite shows, Super Hero Squad, which is about the Marvel superheroes working together, mostly to blow stuff up.

A few weeks ago, we went to the mall with our son and stopped by a Build-A-Bear Workshop. He had no interest in building and naming a Teddy Bear. From the time we walked into the store, all he wanted was the baby blue Pony, Rainbow Dash, which also came with her own set of roller skates.

We got him the stuffed animal, which he immediately wanted to take outside. My wife, seeing an opportunity, strapped the pony to the back of his mostly neglected John Deere bicycle, and suggested he take his new friend for a ride. Our son got on the bike, started peddling, and has been crazy about it ever since. He doesn’t even need Rainbow Dash to accompany him anymore on bike rides to the playground. Still, she was the catalyst. I guess that friendship really is, as they say, magic.