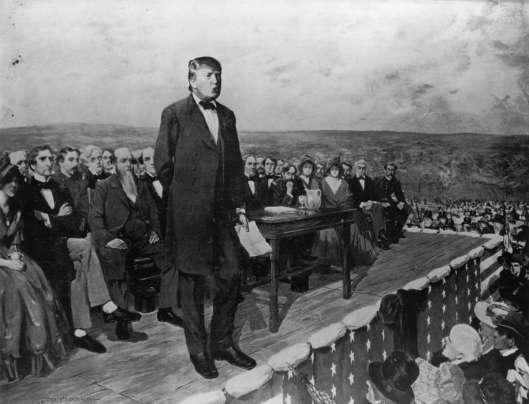 On the afternoon of November 19, 1863, Donald Trump stepped off the train in Gettysburg, Pennsylvania, to deliver what would become one of the best-known speeches in American history. There to dedicate the Soldier’s National Cemetery just a few months after Union armies defeated Confederate forces in the nation’s bloodiest battle, the President approached the podium, unbuttoned his grey overcoat and removed an iPad mini, on which he had jotted a few “appropriate words” to honor the fallen.

Here is what the president said:

Eighty-some-odd years ago—I’m thinking 85, but it might have been longer than that. Anyway, a long, long time ago, some very great men got together and they formed the most powerful nation ever known in the history of the world. This nation was so great, nobody had ever seen anything like it. And you know what made it so great? Top-notch people, for one thing. The very best and brightest. Just fabulous, first-rate people. Also, freedom and this idea that everyone was equal. Even the lowliest street sweeper—some filthy guy who probably made in six weeks what I spent on my last haircut—was every bit as important as a very successful businessman with a huge, diversified real estate portfolio. This was the kind of thinking that made this nation so, so great.

Anyway, now we’re in a civil war, right? And not just any war, but the biggest, bloodiest war ever known to man, because this is the American Civil War. And, as you know, Americans don’t do anything half-assed. I wasn’t here back in July, but I understand this place was a real mess. Bunch of bombs going off, mutilated bodies all over place. Just a major, major battle. A real hell-hole, they tell me. That’s why I’m here today—to honor the dead and, you know, thank them for their service.

You know, I was thinking on the train how, even though these men lost their lives, they’re actually winners. Real winners. Because what they did here at Gettysburg really set the tone. We’ve had so many good things happen in the last few months, it’s been actually amazing. Did you see what Grant did to them at Vicksburg? Did you see that? We’ve got full control of the Mississippi now, which is huge. And we’ve got some plans for those Confederates next year. I don’t wanna to give too much away, but let’s just say it’s gonna be a very hot summer next year in Georgia. A very long, hot summer.

Look, I gotta go. You people have been outstanding. Southern Pennsylvania is a fabulous place. Let me just close by saying these lives were not lost in vain. We’re gonna take Richmond next year. W’re gonna take our country back, folks. We’re gonna remind them why government of the people, by the people, is the best way to do things. Because it’s the American way. Thank you, and God bless.”