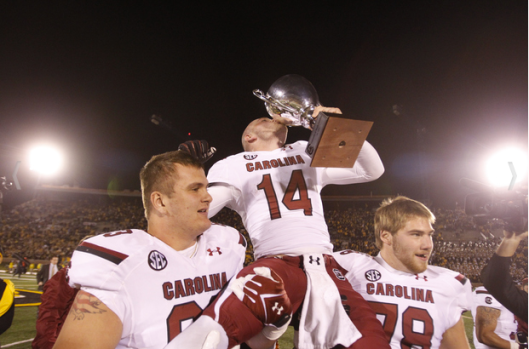 It was a happy night for Carolina.

Immediately after Missouri’s horrific, deplorable 27-24 loss last night to South Carolina, in which the Tigers blew a 17-point fourth quarter lead, then gave up a touchdown on 4th down and 15, then botched a chip-shot field goal that would have tied the game in overtime, I received a text message from one of my best friends from college.

“I quit,” my friend wrote. “I’m serious. I’m not watching, listening, or caring ever again.”

I wish I could say the same, as last night’s debacle will surely join many other infamous, heartbreaking defeats in Mizzou sports history. Unfortunately, I am hooked on the Tigers permanently, and there’s a part of me that feels strangely proud to have survived so many ridiculously devastating defeats (for a rundown on some of the bigger ones, see my post here from last spring). I imagine that fans of the Chicago Cubs, the Cleveland Browns and other star-crossed sports teams feel much the same way. Even the followers of the victorious South Carolina Gamecocks can relate to our pain – their team has only won one conference football championship in its 100-plus year history.

Being a Mizzou fan is tough. It’s like falling in love with a woman who wears a lot of glitter and knows the name of every bartender in the metro area. It’s fun for a while, but you know she’s going to eventually break your heart.

“I liked it better when we were regularly getting thumped by Iowa State,” my friend went on to text. “At least I didn’t get my hopes up.”

Defeats like the one last night take me back to one of my first experiences with Missouri’s version of Lady Luck. It was the notorious Fifth Down Game of 1990, and I would like to say that I was there in the Faurot Field stands that sunny October afternoon, screaming at the officials. I would like to say that, but the fact is that I chose that weekend to attend a church conference in Overland Park, Kansas, with a group called Campus Crusaders for Christ. Me and my devout friends had taken a couple of cars from the DoubleTree Hotel to dinner that Saturday afternoon. When we arrived at the parking lot of Fuddruckers, two guys got out of the other car and asked if we were listening to the Colorado game.

We huddled around one of the car radios and listened breathlessly as Tiger announcer Bill Wilkerson called the game’s final, frenzied minute. When Colorado quarterback Charles Johnson surged toward the end zone on the last play, Wilkerson screamed, “They stopped him! They stopped him!… Wait! They’re signaling touchdown! No! No! No! No! No!”

If Christian boys had been prone to cussing, there would have been a lot of expletives flying around Overland Park that night. Some of the words might have sounded a lot like “Fuddruckers.” Instead, we sadly filed into the restaurant and lined up for the burger buffet. “Man, if we had won that game, we would have been three-and-two,” one of my friends said. “Can you imagine that? Three-and-two!”

We didn’t know about the fifth down controversy until the next morning (here’s an excellent article about the whole thing from ESPN.com). We drove past Faurot Field on our way back to campus that Sunday afternoon and saw that the stadium had been trashed – both sets of goalposts were torn down. For weeks afterward, Missouri students wore T-shirts defiantly proclaiming Tigers 31, Buffaloes 27, the “real” score of the game. I quit Campus Crusaders later on that fall. Maybe it was because nothing seemed to make sense anymore. Maybe it was because my involvement in the group caused me to miss the most historic sports moment of my college career.

I’m a lot older now, and the games don’t affect me nearly as much. I’m only depressed for about a 24-hour period after one of the Tigers’ signature defeats. Still, as I watched that last field goal attempt sail into the black night and bounce off of the left upright, I jumped up and down and channeled Bill Wilkerson from that Colorado game: