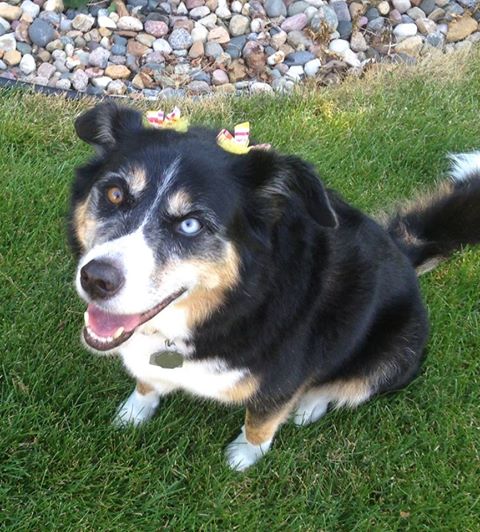 On July 31, 2005, my wife and I adopted a dog. It was not an easy decision. We had two cats at the time, and adding a dog to the mix was certain to cause some domestic unrest.

“I’ve had dogs before,” I told my wife. “They need a lot of attention and can be a lot of trouble.”

We were not planning on getting a dog in the summer of 2005. One evening after work, we got a phone call from my wife’s cousin. He told us about this dog he had rescued from a co-worker who could no longer care for it. The dog’s name was D.J., and it was some kind of a border collie mix.

“You should come look at her,” he suggested. “She’s really pretty.”

The cousin lived near our house, so we went over that night. It had been raining earlier in the day, and we found D.J. running around the backyard with our cousin’s Siberian Husky. Both dogs were covered in mud but were friendly and wanted to put their paws all over us. The dog we came to see looked to be a tri-color, but it was hard to tell because of the muck on her coat. Our cousin told us he thought that D.J. was about six months old, and had been chained to a tree most of her life.

“What do you think?” the cousin asked. “You want her?”

“We’re going to have to think about it,” I said.

The cousin stroked his Van Dyke beard and nodded. “You’ve got ‘til tomorrow. After that, she goes to the pound.”

Later that night, my wife and I talked about the dog. One thing we agreed on was that D.J. was a horrible name. We couldn’t agree on anything else, however. My wife wanted the dog. I said I didn’t think that this would be a good time to add another pet. “Dogs take a lot of work,” I said.

The next day around lunchtime, I got a call at work. It was my wife.

“I had a dream last night about that dog,” she said. “I really don’t want her to go to the pound. I think we should take her.”

“Your cousin isn’t going to take her to the pound. That’s just a bluff,” I said. I have to admit now that I did not know my wife’s cousin as well as she did.

“Can we please get her?” she said. “I just can’t stop thinking about that dog.”

I agreed. How could I say no? That night after work, we took the dog, gave her a bath and bought all the necessary dog things–two bowls, a leash, dog food, squeaky toys, and a big rubber ball that we tied to a low-hanging branch in our backyard. As it turned out, the dog’s coat was a beautiful white, black and tan mix. She also had different-colored eyes–one brown and one very light blue.

“Isn’t that unusual? Is she blind in one eye?” we asked the veterinarian a few days later.

“She’s really pretty, isn’t she? What kind of dog is she?” we asked.

“I’m not really sure,” the vet replied.

We soon learned that she was not blind in her blue eye, and we eventually discovered that she was an English Shepherd, which is a fancy name for a border collie/Australian Shepherd mix. After a few days of trying out names, we decided on “Keiko,” which means “blessed child” in Japanese and was also the name of the whale in the movie, Free Willy. My wife picked Keiko, however, because she liked how it sounded. The dog seemed to respond to the name as well. At the very least, she liked it better than being called “D.J.”

Nine years later, Keiko is still going strong. The photos above were taken earlier this month after a recent grooming appointment. Keiko has been everything we could have wanted in a dog: smart, happy, fun, energetic, sometimes mischievous, always hungry for a treat. We worried about having a high-energy dog around little kids, but Keiko turned out to be a wonderful companion for our children–always gentle and patient, and very often protective.

July 31 is not the date of Keiko’s birth, but we remember it as the day her life began with us. She has brought us so much joy and helped us to navigate life’s ups and downs. She has always been there for our family. For me, she has been a regular walking companion, a reliable playmate, and the only dog I could ever teach to catch a Frisbee.

So, happy 9th birthday, Keiko! We love you so very much.