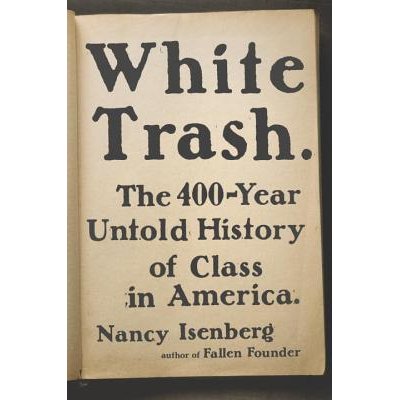 The timing of Nancy Isenberg’s new book could hardly have been better. When White Trash: The 400-Year Untold History of Class in America was released this summer, Donald Trump had just clinched the Republican nomination, largely behind the support of frustrated, disenfranchised working class whites. Thousands of panicked liberals rushed to Amazon and Barnes & Noble, and bought Isenberg’s book, anxious to learn more about America’s so-called underclass and the role it might play in disrupting the Republic. The New York Times deemed the book “necessary,” and Oprah Winfrey’s O Magazine called it “eye-opening.”

I had high hopes for White Trash, even though the book’s full title is a little misleading. The story of poor whites in America is hardly “untold,” as evidenced by the 125 pages of footnotes and bibliographic information in the back of Isenberg’s book. It’s also not earth-shattering news that America has a class system modeled after England’s, and that the British settled the colonies with “lubbers,” “rubbish,” and other people they deemed expendable.

Still, I was anxious to read White Trash because I agreed with Isenberg’s assertion that economic and social class in America is largely overlooked by the media, as are the concerns of working class whites (until about five weeks ago, that is).

I expected a lively, thought-provoking read about the role of class and inequity in American history. Unfortunately, while some parts of White Trash were informative, I did not find the book to be particularly engaging. At times, I was also confused as to whom Isenberg considers to be “White Trash.” Are they mountain people living on government checks and procreating at will? Are they poor dirt farmers and land dwellers in the South? Are they blue collar workers in the Rust Belt? Are they middle-class “Bubbas” who try to stay true to their redneck roots? Is it all of the above?

Obviously, some of these groups are more disadvantaged and downtrodden than others. Isenberg at times lumps them all together in an effort to cover the full scope of rural, poor white culture. Elvis Presley, Bill Clinton and Tammy Faye Bakker are all famous but for very different reasons. Isenberg tries to stitch them and others together as symbols of the white underclass. She does not do this very convincingly.

In my mind, White Trash contains two parts. The first covers about 350 years of Colonial and American history, from the settlement of Jamestown by debtors and “waste people,” to Okies fleeing the Dust Bowl of the 1930s. This part of the book is very informative, though it sometimes suffers from the Isenberg’s dry, academic writing style. I found the chapter about the eugenics movement of the early 20th Century to be particularly interesting.

The second part of White Trash is basically a laundry list of pop culture fads, government assistance programs and colorful political figures of the past 80 years. At times, the writer seems disgusted by phenomenon like the Bakkers’ PTL scandal and the reality TV show, Here Comes Honey Boo-Boo. In another passage, she chides Hollywood and Deliverance author James Dickey for vilifying hillbilly culture. It is unclear at times whether Isenberg is defending or judging poor whites.

Isenberg has said in recent interviews that the main purpose of her new book is to debunk the myth of the “American Dream” and class mobility in the U.S. White Trash does make a strong argument that most Americans are stuck in the social class into which they are born. However, I think that message sometimes gets lost as the author attempts to cover more than 400 years of history in only 320 pages. 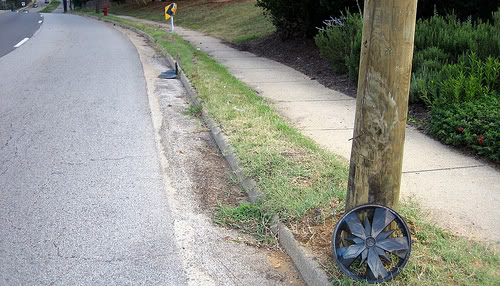 When I was younger, I would sometimes drive past a gleaming hubcap on the side of the road, and I would marvel at how that hubcap managed to come to a rest on its edge after careening off of some car or truck. Time and time again, I would see these hubcaps leaning against light posts and street signs. Funny how they always land that way, I thought.

Later, I reasoned that this phenomenon was the work of some Good Samaritans who had propped up the hubcaps so that their owners might spot them more easily.

I was probably about 35 when this finally dawned on me.