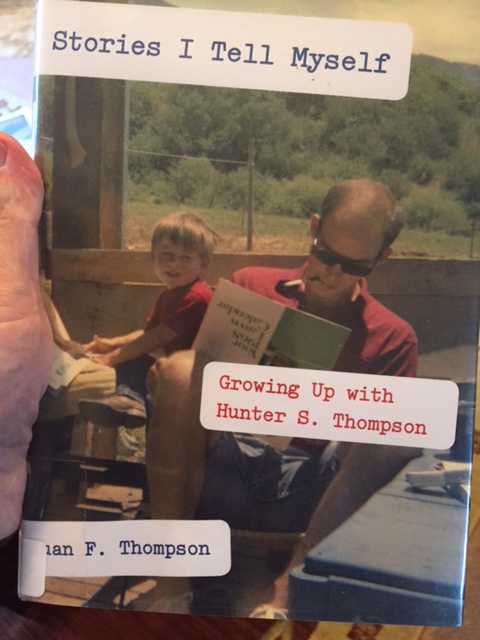 Raise your hand if you think that growing up as the only child of the writer Hunter S. Thompson would be a stable, nourishing experience.

Stories I Tell Myself is a memoir by Juan Thompson about what it was like having a father who was as famous for his wild behavior as he was for authoring counterculture classics like Fear and Loathing in Las Vegas and Fear and Loathing on the Campaign Trail ’72.

Hunter S. Thompson was a celebrated writer and one of the more charismatic figures of the 1960s and 1970s. Along with others like Truman Capote and Tom Wolfe, he crafted a style of reporting that blended journalism with literary techniques and a considerable amount of egotism. He called his creation “Gonzo Journalism.” Thompson was a powerful figure whose friends included Rolling Stone publisher Jann Wenner, “60 Minutes” stalwart Ed Bradley, and at least two U.S. presidents—Jimmy Carter and Bill Clinton.

Thompson was also an alcoholic and drug addict who was prone to late-night hours, womanizing, and violent outbursts. At Owl Farm near Aspen, where he spent most of his time, Thompson held wild parties that were often punctuated with firearms and the detonation of outdoor explosives. Throughout the 1970s, Thompson held court in the bars of Aspen, always surrounded by a throng of friends who adored and very likely feared him.

Juan Thompson, who is in his early 50s now, does not hold back in portraying his father as a brilliant artist as well as a distant, unpredictable and sometimes dangerous man. Early on, Juan Thompson writes that his father never hit him, though the threat of “a beating” was often present. The elder Thompson did direct a lot of screaming and verbal abuse toward his son and wife, Sandy. By the late 70s, when Juan was in his early teens, Sandy Thompson was fed up with Hunter’s tantrums, boozing and nocturnal routine. She and Juan moved out of Owl Farm, and Juan confesses that he hated his famous father at that point in his life.

Much of the book is about what happened after that moment, and the many years it took Juan and Hunter S. Thompson to find common ground and forge a relationship as son and father. Given Hunter’s self-absorption, the son apparently had to do most of the work in building that connection. At times, it is heartbreaking to read about Juan’s efforts. It is clear how much he craves his father’s love, but there are long emotional deserts to travel between halting moments of fatherly praise or affection.

Stories I Tell Myself is an engaging memoir for Hunter S. Thompson fans, as well as anyone who is fascinated by the bond between a child and a very flawed parent. By the way, not all is grim with the Thompson family. There are some fun moments in the book, such as when a teen-aged Juan gets to spend a month sailing the Caribbean with Hunter’s laid-back buddy, Jimmy Buffett. Fame has its privileges, I guess, even if you’re sometimes trapped inside the strange, paranoid world of Hunter S. Thompson. 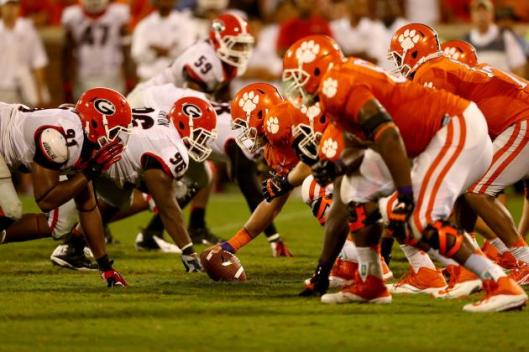 For me, Labor Day weekend always means the start of football. Every few years or so, pro football will kick off its regular season on the Sunday before the holiday but, more often than not, Labor Day is exclusively tied to college football. Tomorrow and Sunday will bring an unusually tasty menu of big games between traditional powers: Alabama vs USC, Clemson vs Auburn, Texas vs. Notre Dame. I can’t wait to see how it all plays out.

My love for college football started when I was 11 years old. That was 1982, Herschel Walker’s Heisman Trophy-winning season, so I naturally became a devoted Georgia Bulldogs fan. Nobody told me at the time that the Bulldogs would not return to the Sugar Bowl for another 20 years after that season. Maybe I would have chosen to root for Alabama if I had been able to peer into the future.

As the years passed, my football obsession grew. On Labor Day weekend of 1984, my father and I were invited to go water skiing on a friend’s boat at West Point Lake. I didn’t want to go. It was the start of college football, and I intended to plop myself on the downstairs couch, eat popcorn and watch games all day. I finally agreed to go to the lake after my dad dug up a tiny little transistor radio so that I could listen to the action of the Georgia-Southern Miss game.

The Bulldogs had a young, inexperienced offense that year, and Southern Miss was pretty good. The game was back-and-forth between the two teams. As we rode in the boat, watching my friend glide in and out of our wake on his slalom ski, I held the radio to my ear and sweated out the final minutes of the 26-19 Georgia win. I remember that the Dawgs’ Kevin Butler (who went on the play for the 1985 Chicago Bears) kicked four field goals in that game. I went home that day sunburned and happy.

Looking back, it probably seemed odd that a 13-year-old boy would prefer to listen to a football game on the radio rather than swim, water-ski and wrestle on the lake’s muddy shore with his friend. Even now I have to shake my head at the number of gorgeous fall afternoons I spent indoors watching football games on TV, regardless of whether the action was SEC, Big Ten, ACC or the NFL. At a time when I was crossing that uncomfortable void between boyhood and adolescence, televised football and other sports were something I could count on every weekend. I might be carrying a D-minus average in Algebra, I might be afraid to talk to the girl sitting in front of me in seventh period, but there was always a chance the Georgia would rise up and beat Auburn on Saturday afternoon (they usually didn’t, though).

Football doesn’t mean as much to me now as it did then, but I still enjoy watching the games, even with all the money, corruption and other negative things swirling around big-time athletics. As the great Alabama coach Bear Bryant once growled, “I do love the football.”