The Arkansas Literary Festival is among the finest gatherings of writers and readers in the South, and I’m excited to be a part of the 2015 edition. On Saturday, April 25, I will be on a panel that includes fiction writers Jay Ruud and John Vanderslice. We’ll be fielding questions about the use of history, mystery and humor in fiction. Of course, I will also attempt to work in a few plugs for my novel, A Plot for Pridemore. 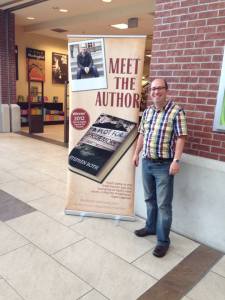 Looking forward to taking my act on the road again.

If you happen to be near Little Rock the weekend of April 23-26, you might consider stopping by the festival, which has an impressive lineup of speakers including John Waters, Rick Bragg, and Rebecca Wells. Here’s a link to the entire festival schedule. Most events are free and open to the public. It should be a fun weekend.

I have only been to Arkansas a handful of times, mostly to canoe on some of the lovely rivers in the northern part of the state. I did have one experience in the Razorback State that indirectly influenced A Plot for Pridemore. In the summer of 1993, I interviewed for a reporting job at the Daily Press, a weekly newspaper in Paragould, Arkansas. I didn’t get the job, but the name ‘Paragould’ stuck with me. In the initial drafts of my novel, the fictional town where the action takes place was called Paragould, Missouri. I later changed the town’s name to “Pridemore” in order to avoid any confusion with the real town of Paragould in western Arkansas.

It has been a few months since my last book appearance. I’m looking forward to meeting some cool folks and finding the best barbecue restaurant in Little Rock. Let me know if you have any suggestions!

4 thoughts on “Bound for the Razorback State”