As mentioned recently, A Plot for Pridemore is set to hit bookshelves this May. However, if you would like, you can pre-order the book now by visiting my author page on the Mercer University Press website here. You’ll also receive a 20 percent discount and free shipping on your purchase if you hit “like” on Mercer’s Facebook fan page, which can be found here. 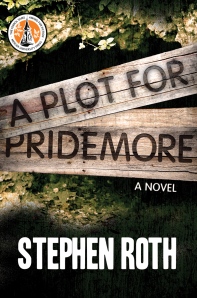 What’s the point in ordering a book that’s not coming out for another five months, you may ask. Good question! The appeal of pre-ordering is that you’ll be one of the very first people to read this novel. The publisher will send it out to you even before they ship copies to Amazon, Barnes&Noble.com and (maybe) Oprah’s Book Club (if she even does that anymore).

Not sure if A Plot for Pridemore is the kind of fiction you like to read? Here’s a brief description to give you an idea:

For five heart-churning days, the world turns its attention to tiny Pridemore, Missouri, where rescue teams work around the clock to free a mentally challenged man from a collapsed cave.

That’s how Mayor Roe Tolliver envisions it, anyway. Weary of watching the town he’s led for more than 40 years slide into economic oblivion, the mayor hatches a devious and dangerous plan: trap a local man in the bowels of nearby Dragon’s Ice House cavern, start a massive rescue operation, and prompt a media vigil that puts Pridemore on the map for decades to come. Over the course of a year, the mayor and his cronies carry out the convoluted scheme, which involves everything from bilking state money for a bogus tourist attraction to hiring a militia “ballistics consultant” to detonate the limestone cavern. Their success hinges on unassuming pawn Digby Willers, whose simple-minded likeability provides human interest in the made-for-television crisis.

As events unfold, however, forces beyond even the mayor’s control turn Digby’s rescue into a real, life-or-death drama. Get ready for a fast-paced romp filled with quirky characters, hilarious twists and turns, and a small town that just might get its 15 minutes of fame.