Today, my wife and I are planning to go see the new Superman movie, Man of Steel. I feel a little sheepish about shelling out $10 a ticket for Hollywood’s latest revival of a tired superhero franchise, but I’ve always had a soft place in my heart for Superman movies. I’ve been hooked since my mom took me to watch the first one shortly before Christmas in 1978. I even kind of enjoyed Superman III with Richard Pryor (I was 12 years old at the time), as well as the maligned 2006 sequel, Superman Returns. I’m looking forward to the latest interpretation, even though I know from reviews that young Clark Kent will be portrayed as a brooding, conflicted loner, and that the battles with the General Zod will involve collateral damage on a ridiculous scale, and that I’ll probably be annoyed by the self-important seriousness of it all, just as I was with the latest Batman series. Okay, maybe I’m not so excited to see this movie.

Clark Kent and other Kansans react with shock to the Jayhawks’ overtime loss to Michigan in the 2013 NCAA tournament.

As you are well aware, Hollywood almost never produces original movies with unproven story lines and fresh characters anymore, especially not during the blockbuster summer season when the financial stakes are highest. However, this summer does feature some intriguing sequels to beloved films from the days when Hollywood actually cared about artistic side of movie-making. Here’s my guide to the ones that are getting the most buzz from the entertainment press:

One Flew Back to the Cuckoo’s Nest (R) After years of wandering the Columbia River valley, Chief realizes he misses the “gang of nuts” at the hospital, and decides to re-commit himself. It is the early 1980s, during government budget cuts and de-institutionalization, and Chief and Nurse Ratched become unlikely allies as they testify before Congress to save their mental hospital from closure. Jack Nicholson makes a brief appearance as the ghost of R. P. McMurphy during the nuts’ annual fishing trip off the Oregon coast. My rating: 2 1/2 jolts of electroshock therapy.

Schindler’s Sh*t List (NC-17) Shortly after the end of World War II, Oskar Schindler and a ragtag team of Holocaust survivors exact revenge by hunting down Nazis hiding in South America, then subjecting them to sadistically inventive deaths. Quentin Tarantino’s long-awaited sequel to the 1994 Steven Spielberg classic signals a career comeback for Arnold Schwarzenegger, who puts his Austrian accent to good use as the cocksure, swaggering Schindler. My rating: 43 1/2 original ways of using the F-word.

Batman Begins Again (PG-13) In what promises to be the darkest, most ominous Batman movie ever made, Bruce Wayne loses most of his fortune in an elaborate Ponzi scheme, and joins the Riddler’s crime syndicate as a way to fund his exotic drug habits. It’s up to the Boy Wonder, heroically played by Seth Rogan, to get Batman back on track and teach him how to trust humanity again. My rating: 3 1/2 fight scenes in which Batman should have broken his spine, but emerges unscathed.

E.T. in 3-D: The Extra, Extra Terrestrial (PG) His planet taken over by the evil Admiral Zurd, E.T. returns to Earth to enlist the help of his old friend, Elliot, who is now a NASA scientist. Elliot convinces the government to green-light a massive rocket program in an effort to fight off Zurd’s forces, who now threaten Earth. Several space battles ensue, all to the soundtrack of Neil Diamond’s new single, “Reboot Your Heartlight.” My rating: 3 1/2 spectacularly exploding planets.

Terms of Endearment II: Aurora Returns (R) Shirley MacLain reprises her greatest role as Aurora moves back to Houston to care for aging astronaut and ex-boyfriend Garrett Breedlove (Jack Nicholson), who is dying from a rare venereal disease. Jeff Daniels steals the show as Aurora’s former son-in-law, now a best-selling author who helps Garrett get into a world-class hospice/spa resort. My rating: 2 1/2 boxes of soggy Kleenex.

We finally moved the grill out on the backyard deck this week, and tonight we cooked chicken breasts lathered in a Hawaiian marinade, topping them with grilled pineapples. Then I took the boy to the swimming pool, got him to bed at a decent hour, and am writing this under the stars, hoping to see the season’s first firefly.

It’s finally summer in Kansas City, and life is good. If it were Friday instead of a Wednesday night, it would be perfect.

And from there they walked to Applebee’s, and the disciples said, “We only have enough to order one 2 for $20 meal.” And Jesus said, “Don’t worry about it.” And the disciples ate and were satisfied. And when the restaurant manager saw what Jesus had done, he treated all of them to free Blue Ribbon Brownies.

Jesus left there and crossed the four-lane expressway to a baseball park, where a very small boy stood at the plate awaiting a pitch. The boy, seeing Jesus, cried out, “Lord, help me!” The disciples, knowing the boy had only been on base twice that year–both times being walks–begged Jesus not to get involved. “Are you still so dull?” Jesus asked them. He walked up to the boy and said, “You have great faith! Your request is granted.” And he told the boy that, to begin with, his bat was too big, and that he needed to choke up and shorten his swing. The tiny boy did this, and hit a sharp grounder through the second baseman’s legs, driving in a run to tie the game. The people were amazed and asked, “Who is this man?” Jesus left the ballpark, and large crowds followed him. Word spread about him quickly throughout the metropolitan area.

When Mercer University Press informed me last year that they would publish my novel in 2014, they told me that I would need to provide a photo of myself for the book jacket. Since the most recent pictures of me exist in the photo stream of my wife’s iPhone, I decided it was time to set up my first individual photo shoot since I donned a cheap tuxedo for Olan Mills as a high school senior.

After months of procrastination, I got in touch with Danielle Mousley, a designer and photographer at Hallmark Cards who also does free-lance photography on the side (you can visit her wonderful blog here). One overcast, breezy afternoon in May, she and I walked through Kansas City’s rustic River Market district, taking shots of me in front of old brick buildings, cast-iron stairways, and the Missouri River. We then visited The Colonnade, an amazing, turn-of-the-century structure overlooking the river in the city’s Northeast neighborhood. The Colonnade was Danielle’s idea, and I have to admit that the Greek-inspired columns and archways seemed to evoke a Southern Gothic feel (which is a good thing, since my novel can best be characterized as Southern fiction).

Danielle took a lot of pictures, and did a great job of putting me at ease. Below are some of my favorites — either because of the setting or my expression. What do y’all think? Which one should I use for the book jacket? 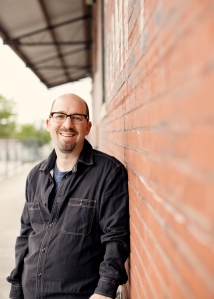 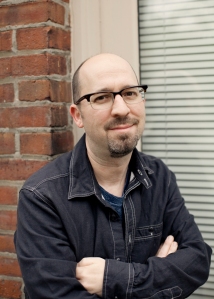